Although seemingly unremarkable in appearance, Betty's Galactic Guardian Bracelet is one of her most important tools in fighting crime. The bracelet contains an arsenal of tools and weapons, such as a laser, a buzzsaw, rocket launcher, flamethrower, trapeze, and other items, it also allows her to contact her crew and for DeGill to contact her via holograms, which causes it to beep and flash, it also contains remote controls for her ship and its teleporter, can project an energy shield, and transforms Betty into her uniform. 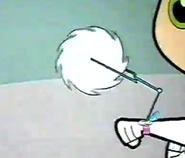 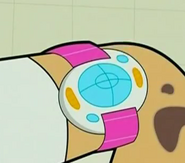