Start a Wiki
Noah Parker (voiced by Laurie Elliot) is Betty's best friend. He's an honor-roll student who enjoys studying mathematics and writing, which makes him a target for Duncan and Penelope's bullying. Unlike Betty, he's not very athletic, and the only sport he seems to be any good at is baseball. However he is shown to be a skilled skateboarder as seen in numerous episodes. He also has a strong crush on Betty, though she seems mostly oblivious to it, and he is generally jealous of whatever boy she's with. At first, he helped his father in his attempts to reveal aliens, but later found it weird. At first, Paloma and him had their differences because Betty paid more attention to Paloma than him and he was deeply jealous of Paloma. He is also jealous of Dylan because of Betty's crush on him and his mutual feelings for her.

"Betty, I tried getting Penelope to change your mind about you performing, but I'm sorry. She said, "no way"."
―Toxic Talent

"I was being sarcastic. Duncan won."
―Winter Carnival

"I tried to be getting it back, Betty, but you won't give it up! It's still locked."
―Power of the Pharaoh

"I'm tired of being the waterboy. It's like I don't even exist."
―The Incredible Shrinking Betty

"The basketball jocks get all the respect. (sigh) I wish I could play like them."
―The Incredible Shrinking Betty 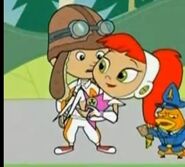 Noah in his underwear

A Buoy Gives Noah Parker And His Blue Bathing Trunks A Piggyback Ride
Add a photo to this gallery
Retrieved from "https://atomicbetty.fandom.com/wiki/Noah_Parker?oldid=18128"
Community content is available under CC-BY-SA unless otherwise noted.