Being better and in charge

Penelope Lang (voiced by Catherine Disher) is Betty's self-obsessed rival on Earth, who thinks of herself as the most popular girl at her school. Her favorite thing is ridiculing the other students, Betty and Noah in particular. She is rich, spoiled, and often uses her popularity or wealth to undermine Betty's social standing, a plan that inevitably goes wrong and violently backfires on Penelope every time. She is usually seen with her two sidekicks named Megan and Sarah. She is used to getting her own way — even if it means stepping all over other people. In fact, she enjoys getting her own way more if she has to step over other people to do so. In "Bracelet Yourself", she tampered with Betty's bracelet which is property of the Galactic Guardians and caused the Star cruiser to lose control. She also seems to not hate, but despise Betty enough to be violent, for in "Pre-Teen Queen of Outerspace", she attempts to kill Betty and her friends, though she thinks it is just a dream. Being Betty's rival, she also dislikes Noah just about as much as she dislikes Betty. Though she has come close to discovering the existence of the Galactic Guardians, having stolen and tampered with Betty's bracelet in "Bracelet Yourself" and read out of Betty's own "captain's log" in Power of the Pharaoh (causing people to think Betty is a science fiction author), Penelope quickly dismisses all of this. She doesn't realize any of the evidence is real, which is fortunate for Betty.

Penelope has pretty brown eyes and long black hair that is styled in a ponytail, she wears a blue eyeshadow, golden earrings, a green sweater, black skirt, black tights and black flats. Many consider her to be repulsive.

"Awwww.....want a sniff? Considering you're not invited!'"
―To Betty, Cosmic Cake

"Know why they call it show business, Betty? 'Cause people show up!"
―Toxic Talent

"Too late! You're out of the show."
―Toxic Talent

"How did that freak get back in my lineup?!"
―About Betty, Toxic Talent

"Awwwww....did you cut your hair with the blender?"
―Atomic Roger (episode)

"Nobody makes winning look this good!"
―Self Sabotage

"What are you wearing, your pajamas?'"
―To Betty, When Worlds Collide

"It was a dark and eerie night, and poor Betty was running for her life! She ran as fast as her pudgy legs could carry her, but she could still hear the monster's footsteps behind her! Boom! Boom! Boom! Boom! The monster drew near, took one good look at her, and....he screamed!"
―The Ghost Ship of Aberdeffia

"Wait a minute. You're asking her out? BUT I'M STANDING RIGHT HERE!!!!'"
―To Dylan, The Great Race

"Listen, buddy! You've got exactly five seconds to stop talking to that GEEK, and get back to seeing ME! Five! Four! Three! Two! One!"
―To Dylan, The Great Race

"Yoo-hoo! I've got two huge bags of Valentines, and you've got none! Awww!"
―To Betty, Betty's Secret Admirer

"If you do it, you'll be invited to all the cool parties, and I'll agree to talk to you in public, uh...two minutes per party! You don't wanna be a loser all your life, do you?"
―To Noah, Solar System Surfin'

"'How I Spent My Summer Holidays', by Penelope Lang. This summer, I had a secret job at Burger Princess. It was...excellent? I...I loved cleaning out the deep fryers...and emptying the garbage? But best of all, I loved...my brown...polyester...UNIFORM!?"
―Reading her essay, Solar System Surfin'

"I bet she's under her bed ready to die of embarrassment!"
―About Betty, Power of the Pharaoh

"Ahoy there! Nice dingy. Better not catch any fish. You might sink."
―To Betty and Quincy Barrett, The Really Big Game

"Why don't you put your money where your mouth is?"
―The Really Big Game

"Hi, Betty! I hear your about to humiliate yourself in front of the entire town! How awful! I can't wait to see it!"
―The Trouble with Triplets

"Where's Betty? We're all here to see her dance like a chicken!"
―The Trouble with Triplets

"Ugh, worse than boring!"
―The Trouble with Triplets

"Aw, what a shame! And I thought you two had so much in common! Guess you don't! Not like Dylan and me!"
―Atomic Betty vs. the Giant Killer Ants

"I predict a Triple-Flop!'"
―No Business Like Snow Business

"This dress is too expensive. But my dad will buy it for me after I come home with my "Having The Most Badges" badge!"
―Like Father, Like Scum

"I think it looks good on you! It covers your face!"
―To Betty, Jingle Brawls

"This show stinks!"
―Bracelet Yourself

"You've messed with the wrong person, kid!"
―Bracelet Yourself

"Ooh! I like being queen!"
―Pre-Teen Queen of Outer Space

"I'm your queen. I want diamonds, hear me, and pizza! With no honey!"
―To the Bee People, Pre-Teen Queen of Outer Space

"Paloma! Dog skiing is NOT on the schedule!"
―Oy, Robot

"Advertisements never lie. That all-day pass is gonna be mine! And I'm so rich, I may not even use it!"
―Return of the Pharaoh

"You can't throw me out of this park for cheating! I should be the winner, NOT THEM!!!"
―Return of the Pharaoh

"Next time don't comb your hair with a rake!"
―To Paloma, Captain Sparky

"First there's magazine time, followed by the Moosejaw Gossip Top Ten, and then we eat."
―Hi-Jinxed

"Who died and made you pack leader?"
―To Betty, Take Two Evils and Call Me in the Morning

"Noah! Report to the principal's office right away! You're chewing your gum too loud!"
―The Cheerleaders of Doom

"You thought you could wear that skirt with that sweater!? What a fashion crime! To the office at once!"
―The Cheerleaders of Doom

"Hi! I'm Penelope, and these are "The New Poodles!""
―Reeking Havoc

"I hope you like pulling weeds! Ciao!'"
―The Minion

"Ooh, Penelope! You're good!"
―As the Worm Turns

"Seriously, Duncan! You really need to work on your social skills!"
―To Duncan Paine, Nuclea Infected

"Aww, still no sign of Betty? You'd better forget about winning. Unless there's a prize for best invisible pie!"
―To Paloma, Galactic Guardians No More!

"We read "Saskatchewan Chic" fashion magazine! Mummy isn't just a subscriber! She's also on the cover! As you can see, on the cover, Mom is sleek and stylish, in her faux mink stole that's not only fashionable, but practical too! Perfect for those harsh prairie squalls! And everyone gets a free magazine!"
―Scribe 2: The Re-Scribing 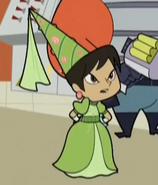 Penelope as a princess. 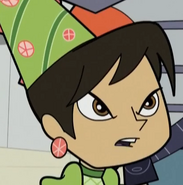 Penelope in a swimsuit.