Robo-Betty (Tajja Isen) is a robotic clone of Betty created by Sparky, who had assembled it from a mail-in kit.

She was originally sent by Sparky to cover for Betty at home when Betty herself was on an adventure. However, in the middle of Maximus's latest death trap, Betty discovers this and recalls her as she and her crew was captured by Maximus. Robo-Betty manages to free Betty and her crew, but when the object of their mission, Captain Lure, was revealed to be a cheaper model of robot, carrying a bomb, Robo-Betty attempts to remove Captain Lure by pushing it out of the ship and into space. However, Lure had managed to hold on to Robo-Betty, removing her from the ship as well, Lure drifted back to Maximus's base Robo-Betty was presumed lost in space. (Robo-Betty (episode))

In reality, she had survived and drifted the galaxy before landing on Crushton, where she was taken under wing by X-5's uncle, B-1. When, on another mission, Betty is forced to have her heavily-damaged ship repaired on Crushton from being repeatedly battered by a super-powered Maximus, Robo-Betty resurfaces and holds Maximus off long enough for the rest of group to drop him into a form of home made acid corrosive to Maximus's suit, but harmless to organic life. Robo-Betty is seen taking Maximus into custody having apparently been made a honourary, and later official, Galactic Guardian. (Best Dressed Villain)

Robo-Betty is identical in appearance to Betty, though her eyes would occasionally glow red and her head spin round, as well as how her holographic coating would occasionally expose the robot underneath, to differentiate her from the real Betty. 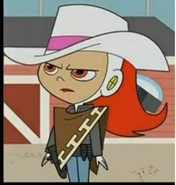 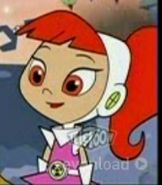 Retrieved from "https://atomicbetty.fandom.com/wiki/Robo-Betty?oldid=14428"
Community content is available under CC-BY-SA unless otherwise noted.