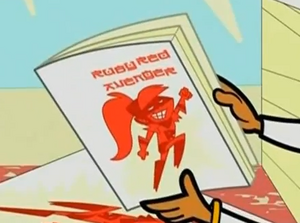 Ruby Red Avenger, also refered to as Ruby Avenger, was a comic book created by Paloma in "The New Neighbour". Noah Parker later collaboated on additional issues in "The Collector". The titiular character in the comic is very much like Betty Barrett's "Atomic Betty" persona. Presumably, the Ruby Red Avenger has adventures similar to Betty's Galactic Guardian missions.

When Betty first saw the cover art for the first issue in "The New Neighbour", she claimed that she liked the Osborne's comics better. While it upset Paloma (and Noah, as she rejected his Cabbage Man comic), it was done to help hide any possibility of her being thought of as a space officer.

In "The Collector", Paloma and Noah tried to sell copies of Ruby Red Avenger, only to have a majority of them destroyed by Betty's cousin Kyle. Betty had to purchase the damaged issues.

And in "Cosmic Comicon", on a table with copies of Atomic Chick is one copy of Ruby Red Avenger.