Sparky (voiced by Canadian actor Rick Miller) is Galactic Guardians' captain Atomic Betty's alien lieutenant and is also the pilot of the Starcruiser with pointed elf like ears, a large, round olive green nose, light green colored skin, and light blue colored hair, and his species is known as Neutropians. Although he is sometimes a bit reckless, and often more interested in other things, such as eating (mostly), surfing, or girls than the current Galactic Guardian mission he is on, he is nevertheless very loyal to both Betty and X-5, and endeavors to do his very best at all times. Also, despite the immaturity that he expresses in various things such as quarreling with the robot navigator and his fellow crew member, X-5, he is shown throughout the early episodes of the TV series to be very skilled at both piloting the Starcruiser and being a combatant.

Sparky is shown to be fun loving and loyal. He also gets distracted often and does things that are ridiculous. He is seen quarrelling with X-5 on various occasions, and seems to enjoy teasing him about being a boring robot. Sparky's mother, Zulia, has a bad habit of dating (male) criminals (Maximus I.Q. and later on, his father, Max Sr). Sparky is protective of his mother because of this fact. His favourite snack seems to be Bundonkian pig snouts, whether pickled, roasted or grilled. 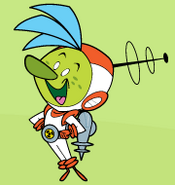 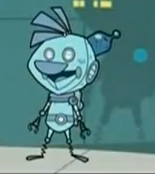 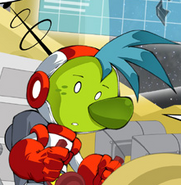 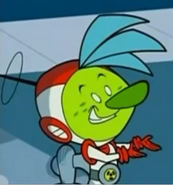 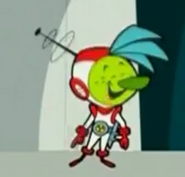 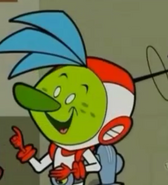 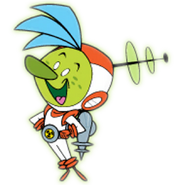 "Why do we always get the cheap seats?"
―Furball For The Sneeze

"Sounds like the perfect place for Penelope and her friends! I say we exile them, and let them eat cake there!"
―Cosmic Cake

"I say we go after him! Storm the boombox!"
―Toxic Talent

"Shouldn't we be out saving the galaxy or something?"
―But the Cat Came Back

"Jumpin' Jupiter!"
―But the Cat Came Back

"That's it! I'm going to have him re-calibrated right now! There's nothing worse than a leaky tin can!"
―Lost in Spa

"Thank you, o master of the moonwalk!"
―Spindly Tam Kanushu

"Hero? Me? No way! I just did what anyone with no regard for their own personal safety would have done!"
―Space Brains

"I'm telling you, it's the hair."
―Atomic Roger (episode)

"You're not the pizza man!"
―The Substitute

"You're about as brilliant as the dark side of Uranus! The chief will come to rescue us, you'll see!"
―The Substitute

"Take that you nefarious evil blob of destruction! Zap! Zap! Pew, pew, pew! You're supposed to be dying a horrible blob-like death!"
―The Good, The Bad, and the Sparky

"Tricky trench! No, wait...uhh...sticky stench! Craters! I forgot the password. Uhhh...you got any slugworms?"
―When Worlds Collide

"You mean, the ghost?"
―Multiple times, The Ghost Ship of Aberdeffia

"Now where did I put that bomb-defusing manual again?"
―The Great Race

"I don't think they're that angry. The guards hate you more!"
―Betty's Secret Admirer

"I wonder if there's a souvenir shop around here! "
―Power of the Pharaoh

"These supervillains are so touchy!"
―And the Winner is...

"That's right! You should be following the Chief, not that frozen ice thing!"
―About Betty, No Business Like Snow Business

"I should be the one who's playing the rules. I'm the hologame expert."
―Infantor Rules!

"Guys, if you're invisible, how am I going to see you applaud?"
―Spider Betty

"Well! He can just forget about his tip!"
―A Dream Come True

"Craters! There goes my picnic lunch!"
―Atomic Betty vs. the Giant Killer Ants

"Maybe it's one of those nice, friendly doomsday devices."
―Galactic Pirates of the Corralean

"How come we never go to the plant of fluffy clouds?"
―Galactic Pirates of the Corralean

"The horror! To be eaten by your favourite snack-food!"
―The Incredible Shrinking Betty

"I never thought I'd ever say this, but.....I think I've lost my appetite!"
―Planet Stinxx

"Sudsy! That's who! Thanks to Sudsy! No more mudsy!"
―Planet Stinxx

"Hey! Who took my lucky cheese?"
―Dr. Cerebral and the Stupifactor Ray

"Do you think I could have an autograph. Not for me, for my....mamoolah. Her name is....Sparky."
―Toy Historyia

"Uh, yo, Hopper, this is really an inconvenient time. Do you think we could reschedule this fight for later?"
―Bracelet Yourself

"X-5, it's school. Everyone's an alien."
―Bracelet Yourself

"Hello, Earth friend! I am the new kid! I am just like you, only new!"
―Bracelet Yourself

"Why don't you just talk to her? That always nods me out!"
―Pre-Teen Queen of Outer Space

"Well, you know what they say! There's a sucker born every minute! Get it!?"
―Auntie Matter (episode)

"Yeah! Stick around! Get a grip, will ya! This is a stick-up!"
―Auntie Matter (episode)

"Chief! Wait up! X-5's a werewolf again! Only this time he licked me! And, boy, is he a sloppy kisser."
―Werewolves on Zeebot

"He's throwing in everything but the kitchen sink!"
―Return of the Pharaoh

"Or, we could just check the label!"
―Pop Goes the Maxx

"Here's an idea! Why not leave the diamond along and pretend you never saw it?"
―Ferried Treasure

"Why do mothers have such bad timing?"
―The X-Rays (episode)

"You be careful with that body! I've got a date on Thursday."
―SWITCH-MO-tized

"Helmsmen! Set course for Bangoon! Atomic Betty, you can follow me! X-5, try not to get in the way!"
―Captain Sparky

"I know this is probably not the time to say I told you so..."
―Earth to Roger

"Listen to this! He describes the desert of Granulus 5 as...hot and sandy! Brilliant!"
―The Scribe (episode)

"I don't see what the big deal is. Nobody watches the Captain Chuck Show anyway."
―Mad Maximus

"Sirens? I don't hear any sirens. What's a siren?"
―The Cheerleaders of Doom

"I need a fire hydrant real bad!"
―The Cheerleaders of Doom

"The term is "mighty close"! And you don't "think", you "reckon"!"
―The Great Sub-TRAIN-ean Robbery

"If I had a time machine, I'd go back in time and eat that corn dog again!"
―Eternal Elixir

"Well, you know what they say! When the going gets tough, the tough get eating!"
―Bee Movie

"Craters! And I was gonna be prom king!"
―Evil Juniors

"It's all in the attitude!"
―Extreme Makeover

"We've already done that part of the story."
―Night of the DeGilla Monster

"My mamoolah said too much chocolate was bad for you. And she was right!"
―The Brat Pack Attack

"OK, but this is hardly the time to be eating. Did I just say what I thought I said?"
―The Fungus Amongus

"What could possibly go wrong?"
―The Gazundheit Factor

"I knew it! He's still the fiend he always was! No food anywhere!"
―Good Kitty

"Looks like we're going after Minimus! Should be a piece of cake! Ooh! Cake!"
―The Strange Case of Minimus-Hyde

"Ceramic ducks!? Ha ha ha! The mighty Maximus is powerless without his little duckie-wuckies!"
―The Strange Case of Minimus-Hyde

"I've got a recipe! I mean, a plan!"
―Galactic Guardians No More!

"Did somebody order a pie?"
―Galactic Guardians No More!

"I don't care how great Maximus's suit is, it's so last year! He looks like a flying fridge! Speaking of food, I'm hungry."
―Best Dressed Villain

"Defenders of the galaxy, woohoo!"
―Takes One to Know One

"I'll be keepin' an eye on you!"
―To Minimus, Takes One to Know One

"So, lemme get this straight. You're not dead?"
―Takes One to Know One

Community content is available under CC-BY-SA unless otherwise noted.