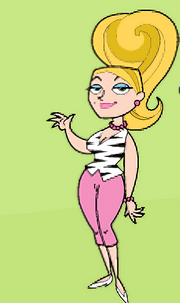 Tanya Barrett (voiced by Kristina Nicoll) is Betty Barrett's mother and spouse to Mr. Barrett. She is a homemaker who is largely oblivious to her daughter's adventures, as she spends most of her life fussing over her pet cat, Purrsy. Betty's mother dresses like a hairstylist, but her normal skills at hairstyling are best left unseen. She usually gets Betty to do things that she dislikes. She tries to discourage Betty's interest in space comics and movies and sports because she thinks Betty is too old and she will never get a boyfriend, but her attempts failed. She tries to make her daughter be more like her which Betty would refuse to want. She is Beatrixo and Jimmy's daughter.

She, like her husband is unaware of Betty's secret of being a Galactic Guardian, the reasons being that Betty wants to save her parents from the knowledge and that they might not recognize if they found out.

She has a lack of understanding about her parents, thinking them to be weird since she knows very bit about them. Beatrixo and Jimmy are both Galactic Guardians, which she is unaware of it. She and her parents have their differences due to the fact they have more interests, which she does not agree with.

Like her daughter, Tanya has her green eyes, beauty mark and blonde hair styled in a classic ponytail. She wears pink jewelry, that matches her pants, and a zebra-printed top.