Start a Wiki
The Betty Clones (all voiced by Tajja Isen) are three evil identical clones of Atomic Betty. They were created by Maximus I.Q. from genetic material in a piece of Betty's hair he had sliced off with his laser sword during a duel, as well as DNA from three different super-powered alien women.

The clones look identical to Betty in every way, shape, and form apart from their eye colors and color-coded mock-ups of the Galactic Guardian uniform. Red for Optica, Orange for Destructa and Blue for Roxanne.

They are each imbued with a superpower from a different planet: Optica, the red clone, can fly and use pyrokinesis; Destructa, the orange clone, can morph into a larger form with rock-like skin and superhuman strength, and Roxanne, the blue clone, with the power of stretching her body like rubber. In addition to these powers they briefly gained the powers to hypnotize people into doing their bidding with hypnotic cheers in "Cheeleaders of Doom".

The Betty Clones don't have these names at first, Optica, Destructa and Roxanne were previously referred to as Betty Clone 1, Betty Clone 2 and Betty Clone 3 respectively while Optica the Fire Witch, Destructa the Rock Princess, and Roxanne the Rubber Woman were referenced as actual other people Maximus used to contribute DNA for the trio.

In "The Trouble with Triplets", Maximus used them to commit crimes and frame the real Betty. This prompts Betty and her team to lure the "Betty impersonator" to Celebra and take her into custody. Unaware that there was in fact three of them and that they had superpowers they easily captured the trio of Galactic Guardians. Once at Maximus's citadel Maximus explained the mechanics behind his plan to the captive Galactic Guardians. Betty turned the clones against each other by initiating a pillow fight between the trio, which escalated out of control due to the introduction of their powers. Maximus was forced to free the guardians to prevent the complete destruction of his citadel. At which point Betty defeated her dopelgangers by turning their powers against them and sending them careening off the side of the citadel. Roxanne accidentally saved Betty when she grabbed Maximus and Minimus trying to save herself.

In its sequel "The Cheerleaders of Doom", they became cheerleaders and gained the power to use their cheers to hypnotize people to do their bidding in which Maximus calls them his Sirens. They used their powers to raid the Galactic Guardian Armory and steal the blueprints of Galactic Guardian HQ, in order to determine a weak point that would allow them to destroy it.

But Betty and her team managed to figure out a way to reverse and duplicate their Cheerleading powers and used them to make the clones speak gibberish for the rest of the series, thus rendering their cheerleading powers useless. Maximus attempted to shake them out of their trance by shocking them but they got angry at him and chased after him.

"(deep, low tone) It's time you meet Daddy."
―Optica, The Trouble with Triplets

"Daddy, Betty 3 is wearing my boots!"
―Optica, The Trouble with Triplets

"Who is this impostor?"
―Roxanne, The Trouble with Triplets

"Am not! you're such a liar!"
―Roxanne, The Trouble with Triplets

The powers of the Betty Clones are a tribute to the three male members of the Fantastic Four: Optica as the Human Torch, Destructa as the Thing, and Roxanne to Reed Richards. 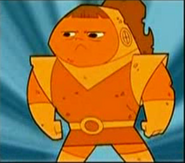 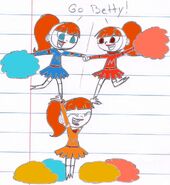 Fan drawn artwork of The Betty Clones as cheerleaders cheering for the real Betty.

Fan drawn artwork of The Betty Clones in school Betty's outfit with their colours. (SPOILER ALERT! Thats what the next few images are going to be when I upload them tomorrow, the next day and the few days after that: modified (yet official looking) artwork.)

Fan art of Atomic Betty and the clones together.

The clones performing a cheerleader trick.

Add a photo to this gallery
Retrieved from "https://atomicbetty.fandom.com/wiki/The_Betty_Clones?oldid=18019"
Community content is available under CC-BY-SA unless otherwise noted.