X-5 (voiced by Canadian actor Bruce Hunter), is the third member, and robot of Atomic Betty's crew, and is a roughly rectangular headed, bright yellow colored, hovering robot, who takes the role of both the navigator for the Starcruiser and providing any unknown information that they may need for their mission. Due to being a robot, he tends to sometimes spout too much information at inopportune times and is exceptionally pedantic, which usually gets on his fellow crew member Sparky's nerves, and sometimes even Betty's as well. The two of them have a grudgingly respectful working relationship. 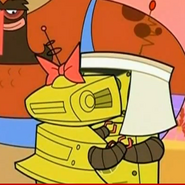 Re-Design
Add a photo to this gallery

"According to my calculations..."
―Multiple episodes

"All of the knowledge in the universe, and I am forced to resort to these cheap theatrics. Sigh."
―Furball For The Sneeze

"It's a small, cylindrical glass vessel containing an unknown liquid, held in place by a piece of unidentified metal, which appears to be conducting current-carrying properties. [beat] A vial, being held in place by a magnet."
―Maximus Displeasure

"I merely activated the current-carrying conductor to create an electro-magnetic field to attract the iron properties in the liquid. [beat] I turned on the magnet."
―Maximus Displeasure

"If we don't get the captain back to Earth, she's going to be late for school."
―Cosmic Cake

"And I just had the ship washed yesterday!"
―But the Cat Came Back

"Go ahead. Make my day."
―But the Cat Came Back

"Wow. That was impressive."
―Science Fair

"Problematic. That was supposed to be a massage feature."
―Bye-Bye X-5

"I'd rather have a Gog beast consume my inner workings."
―Bye-Bye X-5

"Actually, when we smash into the planet, you will go into one thousand, two hundred and fifty four pieces."
―The Substitute

"I'm sure that whatever she's doing, it can't be much worse."
―About Betty, The Good, The Bad, and the Sparky

"Do you mind? I was using those."
―Self Sabotage

"The Scythian President insulted Maximus by calling him a villain. When everyone knows he's a supervillain."
―When Worlds Collide

"I'm sorry I ever doubted your grasp on technology. You are a marvel with mechanics."
―To Sparky, The Great Race

"I can't help it. I'm programmed that way."
―To Flavia, Martian Makeover

"You mean about making our computer systems more compatible?"
―To Flavia, Martian Makeover

"Not the most graceful method of extraction, but under the circumstances..."
―Poached Egg

"The planet of Crushton is a virtual nightmare to artificial intelligence. It is where uncaring owners discard robots when they become obsolete."
―Battle of the Bots

"If you are here, Uncle, Crushton will no longer haunt me."
―Battle of the Bots

"One trillion, two billion and forty-three to one. It's a long shot."
―Slime of the Century

"Because you think Betty's head is of a slightly larger dimension."
―Crass Menagerie

"Which would make you what Earthlings call, a nerd."
―To Sparky, Power of the Pharaoh

"I don't know who's worse. Sparky or the Bangoons."
―Spider Betty

"Can I do that!? Piece of cake! Ask me something hard! Go on! Ask me! I've got the energy to triple the intensity!"
―Power Arrangers

"I wonder what his plan is. [beat] Oh yes, I forgot, you two can't breathe water. That is troublesome."
―Best (Mis)Laid Plans

"You mean the pirate ship you didn't see on the island?"
―To Sparky, Galactic Pirates of the Corralean

"Define "barely"."
―The Revenge of Masticula

"What have we told you about not enraging the evil villains?"
―To Sparky, The Incredible Shrinking Betty

"I suspect this is not the welcoming committee."
―The Incredible Shrinking Betty

"And now we're marooned. You maroon."
―Friends for Eternity

"I've suddenly lost my attraction for this attraction."
―Max-Land

"I've been remodelled. And it's not even my colour."
―Max-Land

"Why must you pretend to do those commercials?"
―Planet Stinxx

"Why rush things? Let him finish his act."
―About The Chameleon, Big Top Betty

"That's because you have to have a brain in order to be affected."
―To Sparky, Dr. Cerebral and the Stupifactor Ray

"Whadda you know? I forgot to include the writing option. [beat] It's a pen! It can't do everything!"
―Toy Historyia

"You look fantastic! What have you been downloading?"
―To B-1, Franken Brain

"As Sparky would say, this vacation bites."
―Franken Brain

"You had to open your big mouth!"
―To Sparky, Evil Idol

"Technically, you are still undersize."
―To Sparky, Bracelet Yourself

"My analysis indicates it is an amalgam of sugars and proteins. And don't call me "honey"."
―Pre-Teen Queen of Outer Space

"Thank you. I believe we've had enough of your black hole jokes."
―To Sparky, Auntie Matter (episode)

"I did that when I was a prototype."
―Oy, Robot

"But it be tradition."
―Ferried Treasure

"We are funkier than a mosquito's tweeter, homie."
―The X-Rays (episode)

"Yes. Pick Sparky. Perhaps you can make him disappear."
―SWITCH-MO-tized

"For the last time, there is no such thing as "bad luck". There is a logical reason for everything."
―Hi-Jinxed

"This is clearly sub-standard literature. I would only appeal to species of low intelligence."
―The Scribe (episode)

"Don't you ever stop eating?"
―To Sparky, Eternal Elixir

"You're not making this any easier."
―The Brat Pack Attack

"I didn't know Sparky cared so much about...metal."
―The Fungus Amongus

"Sigh. Eat your cake."
―The Strange Case of Minimus-Hyde

"With Sparky's skills, I predict a 0.035 percent chance of success."
―Galactic Guardians No More!

"He promised I'd be rolling in dough."
―Galactic Guardians No More!

"I told you Maximus would recognise you. And, he hates pies."
―Galactic Guardians No More!

"No, Sparky. Only a senior commanding officer can commandeer a cappuccino after battle."
―The Case of the Missing Kanushu

"As Sparky would say, not good."
―Best Dressed Villain

"I recall things a little differently. When Sparky refused to let Juanita "borrow" the ship, she took Sparky by force, tied him up, and put him in the closet."
―Takes One to Know One

"You are in big trouble, mister."
―Takes One to Know One

"Well, better the devil you know."
―Takes One to Know One

"Those two are practically mirror images of one another."
―Takes One to Know One

Retrieved from "https://atomicbetty.fandom.com/wiki/X-5?oldid=19282"
Community content is available under CC-BY-SA unless otherwise noted.