Start a Wiki
Zulia (Kristina Nicoll), Sparky's mother, (or "mamoolah" as Sparky calls her) is a sweet, perfect mother figure to anyone she comes across. She's thoughtful, kind, and an incredible cook who will never let anyone leave her house hungry, but has a fiery temper and a vicious hit with kitchen utensils should anyone threaten her or her son. She is currently single under unknown circumstances, but is looking for another boyfriend/husband. Much to Sparky's dismay, she has a bad habit of dating (male) criminals (Maximus I.Q. and later his father Max Sr.). In addition to Sparky, Zulia has one other child, a daughter. She was mentioned in "The X-Rays"

Zulia also started a career as a romantic writer under the pen name Lola Polaris, her first novel named One Thousand And One Romantic Nitros. She replaced Milton Scrivener as Sparky's favorite author after he kidnapped her to remove the competition.

"To be honest, I had my doubts when I joined that intergalactic dating service, but you have been absolutely wonderful!"
―To Maximus I.Q., Slime of the Century

"You beast! You cad! You SLIME!'"
―Slime of the Century and Once Bitten, Twice Slimed

"Don't you ever call me again, mister!"
―Slime of the Century

"Remind me to insulate this house."
―The Revenge of Masticula

"You wait until my son gets here! He won't like what you're doing to his mamoolah!"
―To Masticula, The Revenge of Masticula

"Haven't I met you before?"
―To Maximus I.Q., Once Bitten, Twice Slimed

"Ooh, a fan! Would you like a muffin?"
―To The Scribe, Scribe 2: The Re-Scribing

"My son will find us, and when he does, you'll be in big trouble, mister!"
―To The Scribe, Scribe 2: The Re-Scribing 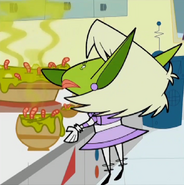 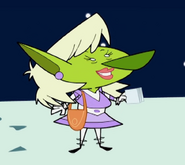 Add a photo to this gallery
Retrieved from "https://atomicbetty.fandom.com/wiki/Zulia?oldid=20743"
Community content is available under CC-BY-SA unless otherwise noted.